Over the summer, I felt a spark of excitement and anticipation to volunteer to be a leader with our high school youth group at church. After hearing Austin, our high school pastor, preach at church, I knew I wanted to dive into life with these high school students. My experiences at the two high schools I worked at as an athletic trainer and teacher were incredibly fulfilling and as I have settled into my passion for teaching at the collegiate level, the stirring to be involved with high school students has remained.

Following some meetings and trainings, I began attending youth group nights and the final pool party of the summer and found myself excited to jump in even further. Fast forward to this weekend. A last minute shift in some schedules created one last open spot for a permit to hike Half Dome with four seniors and Austin. Knowing I hadn’t been hiking regularly and days following this invitation, slicing my knee open on a boat propeller, I questioned my readiness and ability to be on the hike and truly contribute to the “team’s” expedition. Then, mix in being sick the week before we were set to leave; to say there weren’t moments of panic would just be a lie. But I knew this was an experience I would regret passing up and joyfully (with some big doubts) agreed and began to mentally prepare.

From my perspective, the plan to join in the festivities of our church’s high school group was this: meet them where they are in life and celebrate, challenge, support, encourage, and be present for and with them. The key words were: FOR THEM. I truly anticipated that this experience would be all about them; I didn’t spend much time considering an additional purpose. I now know God had and continues to have a deeper plan for what He is showing me through their lives. This weekend’s trip to Yosemite to hike Half Dome was a humbling start.

I’ve completed the hike to Half Dome twice prior to this trip. Mind you, those were both trips during college which has now been 10+ years ago (oh dear goodness that adds some years to my life just writing that sentence)! I considered that it might feel a bit different due to life circumstances and the fact that I am less in-shape than I was in college, but I also tried not to dwell on that concern. I continued to lean on the hope that God would provide me the strength to endure. Thankfully, He absolutely pulled through.

The first half of the hike was definitely harder than I remembered; the steep slabs of rock making the path up to Vernal Falls quickly followed by more uneven and jagged rocks leading up to Nevada Falls—Apple accounted for a total of 322 flights of stairs climbed on this expedition, just to put into perspective. The views did not disappoint but the heavy breathing sure began to add up. Thankfully, we all continued to trek onward, laughing and telling stories and asking each other a mix of fun and serious life questions. Just before noon we reached the summit and began to climb up the cables.

The cables themselves were much scarier and riskier than I remembered and about halfway up, I turned back to Austin who was a few people behind me on the cables and shared my panicky concern with my knee to be able to descend down the cables. Thankfully, he encouraged me that it’d be okay, that “he and the team had me covered,” and we’d figure it out no matter what. I think that is what God reminds me of daily—He’s totally got me and He will pull through if I trust Him. After some quick deep breaths and some short but pointed prayers, I continued to ascend to the summit. As we approached the final steps beyond the cables there was a mix of excitement, joy, and exhaustion. One of our students shared that he couldn’t truly enjoy the top as he feared the descent down the cables—preach dude, preach! I felt the same way! I didn’t remember feeling that tug of emotions—such joy and accomplishment but not fully celebrating due to FEAR. I wrestled with a lot of emotions on top of Half Dome this trip that were far different than those I remembered experiencing on the past two treks. As we realized we had spotty reception on the top, a few of us texted and called loved ones to tell them we had made it!  I remembered both times I had previously  summited Half Dome, I had called my parents house line and my Mom answered–something in that exact moment I realized would never happen again. Momentarily, I was hit with the overwhelming feelings of devastation, defeat, and sadness—grief is like that; it hits in waves, unexpectedly. As I wiped the tears from my face and tried to call my sister and my dad on their cell phones, both calls failed as my service wasn’t strong enough. It was in that moment that I regathered myself and asked for God to show up—it was time to lean on faith and the teammates that were in front of me.

After taking an exuberant number of awesome photos (thanks to Austin for bringing his amazing, professional grade camera and lens), we began the adventure down the cables and I have to say, it was far more FUN and involved less effort than I had feared. The mix of hikers coming up the cables and those coming down were so polite and so kind—everyone was looking out for the person on the next wooden 2×4 step and communicating with one another to make sure everyone felt as safe as possible. One hiker even commented that it had played a role in reminding him that there are still great people in this world that support and truly encourage one another—AMEN!

The miles following the descent off the cables proved the hardest (physically and mentally) for those of us that were at the back of our six pack. I was struggling with my knee injury still healing, another with some pretty gnarly blisters, and another with physical fatigue and mental exhaustion. To say the trek down the mountain was “fun” and filled with the same positive vibes that we started with would be a bit of a stretch. Thankfully, as we all regrouped, Austin continued to fuel our positivity and slowly, the morale of the group came back to where it started. We were off the trail and we had all successfully FINISHED the hike to Half Dome. WE DID IT!

It’s hard to truly capture the experience the six of us shared in a fairly short (okay, long) blog post. There isn’t enough blog space to share all the details about the car rides up and back and the music from the Greatest Showman sung at the top of our lungs and the history lessons sparked by the Hamilton soundtrack along the way. Those will all have to be filed away in our memories, waiting to be shared with friends and family, as they ask about our favorite moments from our weekend excursion.

Reflecting on the hike and this trip as a whole, I absolutely feel God’s hand not only over this trip, but in my life. I pray this experience was as meaningful for the other five individuals as it was for me. I thought I came on this trip for these students, to be a chaperone and to “lead;” in reality, God had so much more in store to show me. He is here and He is for me. I can’t wait to see what He has in-store for this year ahead. Here are a few things I think God showed me this weekend: 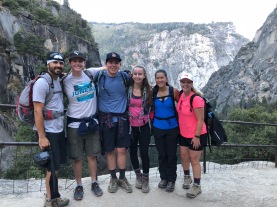 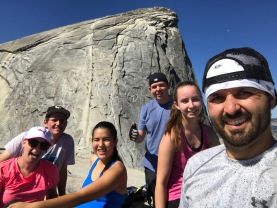 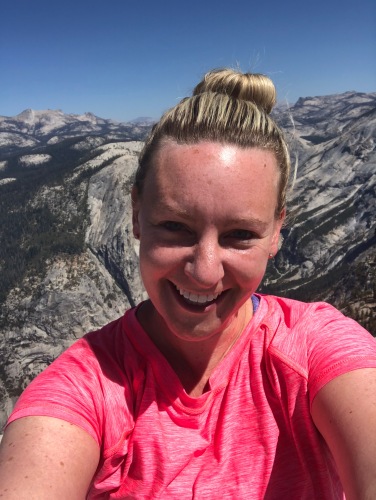 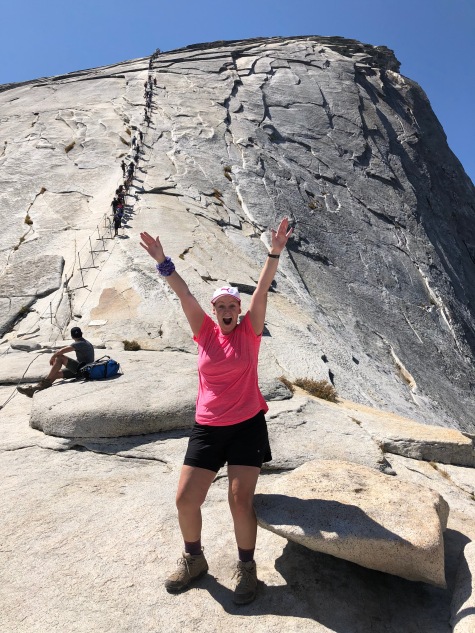 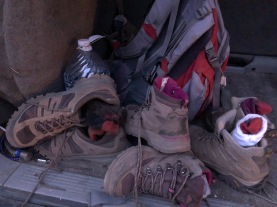 One thought on “half dome”

Welcome aboard! The heart of Vibrant Exposure was imagined in a quaint boutique hotel in Santa Barbara alongside a dear friend of mine from high school. I'm Kelly Franks and have a deep passion for both writing and photography and can't wait for you to journey with me as I share about life and laughter and everything else in-between.
%d bloggers like this: